Part V of a Multi-Part Series

In January, 2009, my friend Stephen V. Dowthwaite, founder of PerfumersWorld, Ltd. of Bangkok, Thailand, visited a Thai agarwood oil producer near the Cambodian border and sent me the photos which appear on this page with permission to use them here. The captions under the photos are taken from Steve's notes to me. No doubt he will share more about this experience in his 5-Day Perfumery Workshops.

In the article below I have provided some additional information on agarwood and agarwood oil production.

A worker is infecting 6-10 year old trees with a secret recipe to encourage the fungus that attacks the tree. In the process of fighting the fungus, the tree produces the agarwood oil turning the wood black.

Agarwood oil goes by many names — eaglewood ... aloeswood ... oud ... oudh ... oodh ... chen xiang ... pan d'aguila ... bois d'aigle ... adlerholz — to name just a few. Agarwood oil is particularly prized in Asia and the Middle East but occasionally finds its way into a Western perfume such as M7 by Yves Saint Laurent. 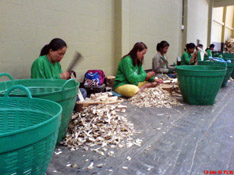 Ironically, it is this oleoresin produced by infected trees that makes the agarwood tree valuable. The desired fragrance is in the fungus-fighting oleoresin and it can be released through distillation of chips of the infected wood. Uninfected trees cannot produce Agarwood Oil.

While the aroma of Agarwood is not well known in Europe and the Americas, it is a favorite fragrance for joss sticks, particularly in India. In Middle Eastern countries Agarwood Oil finds use in both attars and perfumes. The fragrance is a complex woody aroma which can easily be described as "exotic" or "oriental." 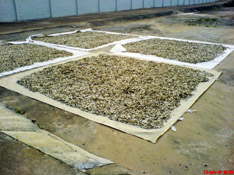 Chips are left in the hot sun to dry and dehumidify for 2 or 3 days to remove as much water from the wood as possible.

Traditionally Agarwood Oil was produced from infected trees growing wild in forests. Even today the top grades of Agarwood Oil are harvested from trees in the wild. But deforestation and non-sustainable harvesting of forest grown trees has led to greater environmental awareness and the rise of sustainable Agarwood Oil production through the use of nursery grown agarwood trees and artificial methods of infecting them. 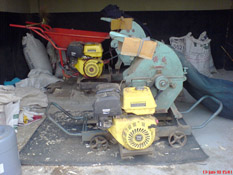 Once the infected chips of agarwood have dried in the sun for a day or two, they are put through a mechanical chipper like this one and reduced almost to sawdust.

In the forest, the agarwood tree may become fungus-infected by natural means. But for communities living near agarwood forests, techniques have been developed to help nature along and thus provide a more stable source of income for these communities. The methods used to infect agarwood trees are closely guarded secrets.

Nursery grown agarwood trees must also be infected — by nursery workers — and again, the exact methods whereby they accomplish this are closely guarded secrets.

Once patches of the tree have darkened with the infection-fighting oleoresin, the wood is harvested and the darkened sections of wood are chipped off the logs for oil production. The undarkened wood has no value in the fragrance industry. 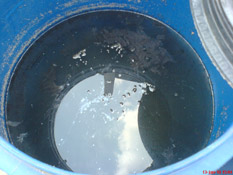 Chips hardly larger than sawdust are soaked in water in barrels and allowed to "ferment" for 1-15 days to prepare them for distillation.

After the chips of infected agarwood have ben left in the sun to dry for a day or two they are gathered up and put through a mechanical chipper which reduced them almost to sawdust.

These sawdust-like "chips" are now soaked in water in barrels and allowed to "ferment" for ten to fifteen days. Starting off a light brown, they gradually darken, giving off a foul aroma.

The agarwood mash is now placed in distilling pots and covered with several inches of water. The lid is closed and the pot heated until the water boils. The boiling water ruptures the cells of the wood and the vapor of Agarwood Oil and steam rises to the top of the pot and escapes released through a tube leading to a condenser which cools the vapor. The condenser itself is repeatedly cooled by water. 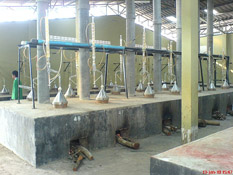 After its soaking, the barrels of agarwood mash are emptied into distilling poots and placed over wood fires for distillation. The heating process may look primative but the fires are tended by skilled workers who control the temperature quite carefully.

As the vapor passes through the condenser and is cooled, it reverts to liquid form and is collected in a vessel where the oil and water separate. (Oil and water don't mix!) The water is drawn off leaving Agarwood Oil.

Several distillations will generally occur with the first producing the highest grade of Agarwood Oil and the last, the lowest. These distillations may continue over a week's time. 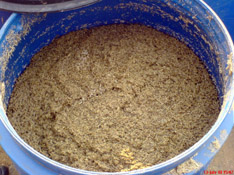 After distillation, the remaining mash from the distilling pot is left in the sun to dry. It will be ground up and used to make joss sticks (incense).

Before being bottled, the Agarwood Oil is filtered to remove dirt and impurities.

The residue from the distilling pot is now dried in the sun for several days before being crushed into powder for joss stick (incense) production.

Part I: Making Your Own Perfume For Pleasure or for Profit