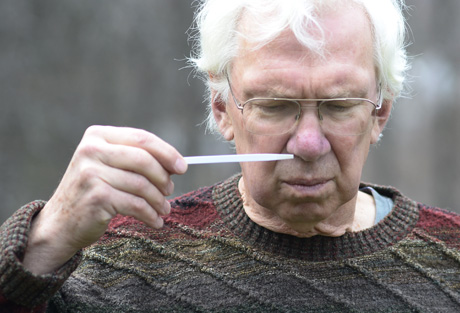 Testing perfume with a smelling strip.

Using perfume test blotters to evaluate your perfume, or any perfume or aroma material, is not as easy as many would think. The nose itself, even for the person with a good sense of smell, plays tricks on us, particularly when we are not aware of how the nose is operating.

The problem is that the nose quickly adjusts to a new scent, sends a message to receptors and then, so to speak, clears itself out — desensitizes itself to the scent which it had just detected — to be ready for the next scent.

You can prove this to yourself by smelling, one right after the other, two test blotters which have been dipped in an identical amount of the same fragrance. The second — although identical to the first — will seem to be weaker.

It is this problem of the desensitization of the nose which makes comparing two fragrances so difficult. Thus, the first "rule" for smelling tests is to be careful with your judgments. Don't take quick sniffs and think you have nailed it. Analytical smelling takes time to learn and even experienced perfumers can be fooled. Come back to the same combinations of fragrances and see, over time, what your reactions are and whether they stay the same or change.

Here are some points to consider when making tests with perfume blotters:

When smelling when you aren't sure what a fragrance is, think of, and write down, all the things which is is NOT. This can help you rule out this or that until you finally pinpoint what it IS.

Take regular "fresh air" breaks from your smelling tests so that your nose and your brain will be more alert.